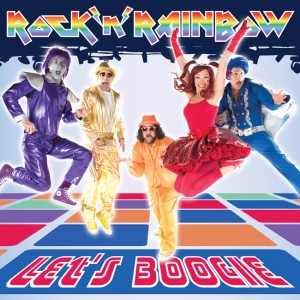 A ding-a-ling from the handlebars kicks off Let’s Boogie! with “Bicycle,” a solid rock up-tempo number that puts a little punk in a nod to Queen. An homage to Deep Purple follows on “Faster Scooter Cat,” in which the band knocks out some great riffs with clockwork precision.

If there is such a thing as funk-gospel dance music for little kids, “The Freeze” is it. Influenced by Sly and the Family Stone, the album’s title track, “Let’s Boogie,” is a full on disco tribute that issues yet another call to get up off the couch and shake it on the dance floor.

The funky counting song, “Five Senses,” offers a tip of the hat to the Sesame Street “Pinball Number Count” song. (Pre-release video singles of “The Freeze” and “Five Senses” have already racked up tens of thousands of views on YouTube.) Another bright spot is “Hokey Funky,” a refreshing take-off on the classic Hokey Pokey song that lets listeners know that FUNK is what it’s all about. It’s “Las Vegas or bust” with “Blue Elvis Blues,” while “Elephants Have Wrinkles,” gives kids a terrific minor mode tune dressed up in an appropriately pachydermic style punctuated at the end with a great kid joke.

Be the first to review “Let’s Boogie! (Rock’n’Rainbow)” Cancel reply